In the field of fire safety, the requirements for fire delay, certification, control and closure of fire doors are becoming increasingly stringent. The fire resistance of a door/frame element determines the extent to which the construction is able to limit the development of fire and seal off a given zone in a building. Where fire safety is concerned, the European standard BS-EN 1634-1 applies.

This standard defines exactly how a door should be tested and under which circumstances. The fire test should only be conducted by an accredited certification authority. Furthermore, the test must be conducted on a full door construction as used in the field. After the fire test, a test report is drawn up, and based on this report and the fire test, the performance of the door is classified according to standard EN 13502-1.

The European standard BS EN 13501-1 specifies the following classifications for the fire resistance of building parts:

What does this EI requirement mean?

In many European countries, this EI requirement applies to public spaces. Since heat transfer is prevented during a fire, the heat irradiation on the other side of the fire door is limited. This means that the heat will not block escape routes. In situations where this requirement is in force, doors must meet the EI requirement, which can be divided into EI1 and EI2.

During a fire, smoke development is often a bigger threat to people than the fire itself. The disorientation caused by smoke extends the time it takes to escape the building via an escape route.

In the Netherlands, smoke resistance has been derived from the flame density since the first Building Act of 1991. As a rule of thumb, the one and a half times rule applies: if a wall is fire resistant for 30 minutes based on flame density, it will be assumed that it will be smoke resistant for 45 minutes. Until the recently presented modifications in the concept Building Act Besluit Bouwactiviteiten Leefomgeving (BBL), which was published in the summer of 2015, there was no real mention of protection against smoke. This is all about to change, however.

With the advent of these new rules on smoke resistance, which will legally take effect in 2018 after a transition period of 3 years, door constructions must be tested according to EN 1634-3. The Sa and Sm smoke permeability classifications will be determined based on this test.

Depending on the application of the construction component, one of the two criteria applies.

Our advice regarding fire and smoke resistance

Seals are an important part of fire door/frame constructions. Through the use of materials with a high ignition temperature, such as silicone seals, the ignition and melting away of the seal is delayed. This contributes to a better fire resistance performance of the construction.

In the case of dropseals, which are often used in door/frame constructions for soundproofing and the creation of a barrier-free passage, the requirements are often combined. In that case, there are requirements regarding both fire resistance and soundproofing. When doors that are to be used have been tested without dropseals, in most common situations, door manufacturers can use the test reports of our EllenMatic dropseals to prove that the implementation of the EllenMatic dropseal does not affect the fire resistance of the tested construction.

According to EN 1634-3, the gap below the door may be sealed for the Sa test. We believe that, during tests, it is essential to simulate an actual, realistic situation. This is why we recommend always fitting a dropseal if Sa criteria must be met in practice, which also means testing with a dropseal. Because by preventing the passage of cold smoke, escape routes remain smoke free longer and any material damage caused by smoke and soot is limited. 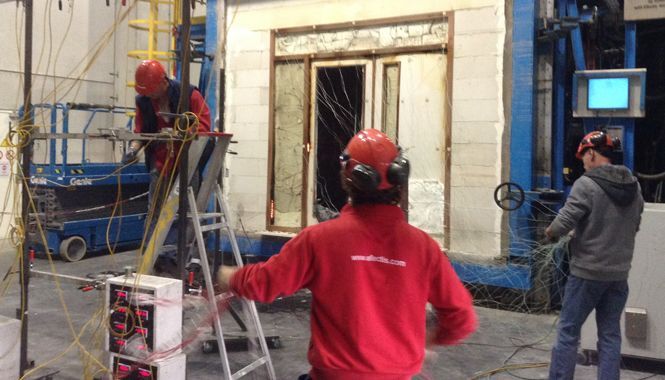